Stand-up Comedy is something I rarely get to see, and whilst the world and the UK have a great wealth of stand-up comedians, I usually don’t get to see much of it live. This is mostly due to stuff like who it is that’s performing, and if I know or have previously seen or heard something of/from them. It’s a good thing in that sense then that we have TV and DVD performances from these comedians. It gives us an opportunity to discover and enjoy their sets, plus provide a possibility of hope that maybe one day we’ll get to see them live!

Anyway, in this list I have picked my Top 5 favourite Stand-up Comedians to share with you. Now, like many other lists, there have been some casualties, or if you prefer; the unlucky ones who didn’t make it into the Top 5, but just so they can get a peek of a mention; here are the unlucky few: Simon Evans, Al Murray, Tim Vine, Harry Hill, Alexei Sayle, Ross Noble, Marcus Brigstocke, and Peter Kay. So, without further a-do; here are my Top 5 Favourite Stand-Up Comedians; Enjoy!

5. Nick Helm – I first became a fan of Tim Vine nearly 10 years ago now, and thought his one liner collection was really funny; and then I heard this bloke on an episode of Russell Howard’s Good News; and within thirty seconds he was yelling at someone in the audience asking if they liked jokes; it was seriously funny! Nick Helm is the aggressive alternative to Tim Vine; he has a collection of one liners that you just don’t see coming as they aren’t even related to each other. Then it gets more intense as he tells poetry about love and relationships, followed by music about all kinds of things. The thing though that stands out most for Nick Helm though is how as time passes on he becomes more enraged and aggressive to his own audience. It’s so surreal, but also very funny!

4. Bill Bailey – Like nearly everyone on this list, my first viewing of Bill Bailey came from watching him on TV, and while he did appear in both Black Books and Never Mind The Buzzcocks, my first viewing of him came on BBC Two‘s Monster Night. Bill Bailey is hilarious at best; he provides a machine gun of comedy as he creates pun’s out of nowhere in the most unlikely cases. His music is fantastic too as he covers a whole range of different styles using a cavalcade of instruments, making you laugh at things you wouldn’t have dreamed of laughing, or thinking at.

3. Bridget Christie – I first heard of Bridget Christie from a couple of appearances on Have I Got News For You. Then I was able to go see her live at The Dukes in Lancaster; and it was such a funny performance. She was able to tell these very long cases and stories that produced mini laughs, but built up to one massive and satisfying punchline that brought the whole house down. She is very good at telling stories about her personal life, but then able to switch on a knife’s edge to making laughs about stuff like politics and society, but then switch again, to stuff like telling her children why she doesn’t celebrate Valentines Day. It’s a real shame in many respects why she doesn’t have her own DVD, or even appear on TV more, because she’s seriously funny, and rightly deserves more air time, to allow her audience to grow. She should at least be featured more regularly on HIGNFY! 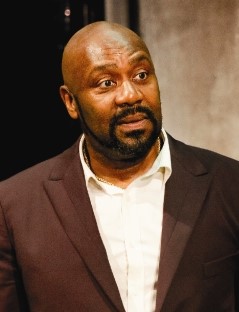 2. Lenny Henry – Lenny Henry has been making me laugh for a good couple of decades now. I first heard about him at a young age, and then a few years later I saw some of his BBC shows like Lenny Henry in Pieces, and The Lenny Henry Show. Whenever he makes a stand-up appearance, it feels like a real treat to watch this legend perform. His comedy is very broad and appeals to whole ages and generations; as he provides an insight to his upbringing and life in a very funny way. But as time has passed, he has been able to continue to find things to make people laugh; from popular culture, to things happening around us all in the current climate. He has remained this very insightful, but also very funny personality!

1. Jasper Carrott – Discovering jasper Carrott almost came entirely by luck. I was watching a series called The Jasper Carrott Trial, and his face looked kind of familiar, but I did not know who he was, but apparently he had been around for years! From that moment on, I just grew to love his comedy! One of the pioneers observational comedy, Jasper Carrott is able to make you laugh simply from telling stories about the mundane and everyday activities that we all encounter. He is talking about his own life and experiences, but because they sound so familiar, it’s like we are living them too, and looking back on these experiences just makes you laugh. It’s like you are or I are telling these stories, and looking back on them, and it’s a natural thing to start laughing. Carrot’s repertoire is so simple, that he can even tell stories about some of his adventures across the globe, and they still make you laugh. Accompany this with his legendary guitar songs which are made simply to make a quick joke; and you are going to have a really enjoyable night in of comedy!