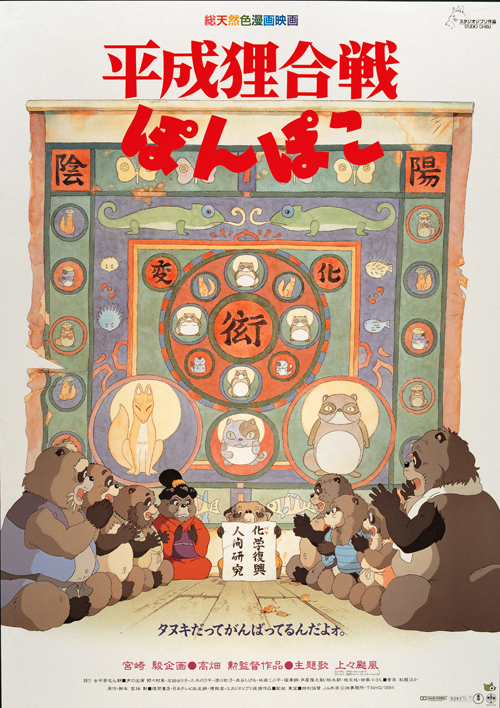 I got my first taste of the works of Studio Ghibli in 2014 when I saw The Wind Rises. It was a film I rather enjoyed and put it in my top 10 films of that year. Then in 2015 I watched My Neighbor Totoro and since then began to watch more and more Studio Ghibli films. I have not seen them all – yet! – but I have seen many of their classics including Princess Mononoke, Spirited Away and Kiki’s Delivery Service. But my absolute favourite to date is Pom Poko.

It was during a special series on Film4 of Ghibli’s films that I caught a glimpse of Pom Poko. But I didn’t watch it in the end, rather deciding to watch My Neighbor Totoro on record instead. Having felt a little bad by bit and wanting to watch Pom Poko, I recorded it the next time it was on, quite a few months later. I gave it a watch and have loved it ever since.

Directed by Isao Takahata: Pom Poko follows a group of Raccoons/Tanuki in Japan, who are trying to prevent the construction of a new housing estate on the outskirts of Tokyo which happens to be where the Raccoons live. The film is told in a documentary style film, with a narrator providing a third person overview over the Raccoons plans to prevent the development. The film also divulges that Raccoons have three forms including what they look like near humans and what they really look like when humans aren’t around. It is also revealed that Raccoons can transform, and it’s through these transformation abilities that the Pom Poko Clan (hence the name) do their best to try to stop the developers.

Pom Poko is quite a fun little film. The Raccoons are presented as being rather like humans in that when the Raccoons gain access to a TV, they have no further regard for doing anything productive and would rather just watch TV all day long. Raccoons in the film are presented as being lazy in general and prefer to do things the easy way and party all night long. It only really comes down to those who work hard who manage to make something of themselves in the film’s main run. Raccoons could be considered rather proud of themselves in certain situations but are generally quite different from one another. Some regard themselves as being warriors and even go far as to endanger and attack the humans in order to stop the development, while others prefer the idea of using transformation to scare the humans away. Due though to their laziness, things don’t go all that swimmingly for them as the story pans out, and things just get worse for them.

Though while being a fun film in all cases; Pom Poko though is not a documentary about Raccoons, but a demonstration of how bad Humans are! The film likes to present that it has and always been humans’ fault for the destruction of habitat and the removal of animal homes. It likes to state that while Raccoons can transform themselves and the things around them, it is not a permanent transformation, whereas humanity has transformed their world permanently for their own gain, while Raccoons did it for just a bit of fun. Pom Poko pretty much shouts out that Raccoons are better than people, and for good reasons! The film though does end with one character explaining that not all animals have been wiped out or are necessary endangered; rather that they have found new ways to adapt and live beyond humanities transformations of the world.

Much like other films in Studio Ghibli’s history; Pom Poko also carries a rather fun and memorable soundtrack; this time composed by Shang Shang Typhoon. You will hear the main theme used a few times which is a rather fun track; and the end credits theme is possibly one of the happiest film tracks of any movie (listening to it now is starting to make me weep a little). The Raccoons party theme is also heard quite a lot as Raccoons do like to party, although sadly I have not been able to find that track anywhere, but it’s a great beat with a traditional vibe.

I still have many Ghibli films to watch. On my to watch DVD pile right now I have Tales from Earthsea, Ponyo, and the pre-Ghibli movie Nausicaa of the Valley of the Wind; but for now, Pom Poko is still my favourite. It’s a genuinely funny film with an overall theme of fun. It carries a lot of weight about the world and tries to send the message home about looking after nature; not destroying it. 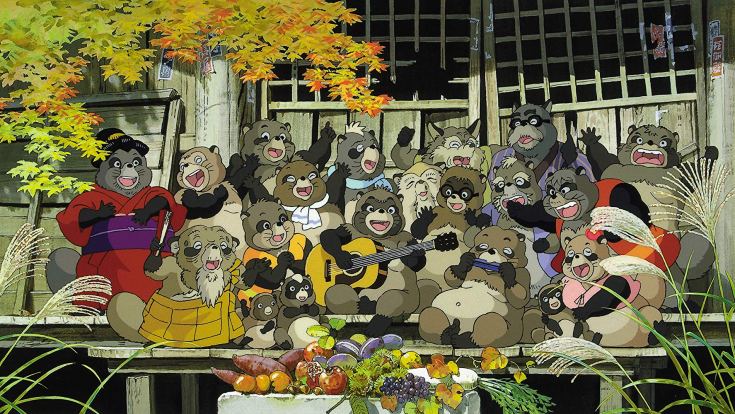 In between all that it is a film with some wonderful characters and seriously enjoyable scenes with a soundtrack packed in to the rim, which altogether, creates a fun little ride.