One of the most popular board/tabletop games you can buy is Carcassonne. In Carcassonne the player places down tiles to create cities, roads and farmland; then places one of their own pieces/meeples to score points. It’s a pretty simple idea which in turn creates some tactical gameplay methods as the player’s try to score the most points. I like Carcassonne, but not as much as I love Taluva.

Taluva is very similar to Carcassonne in that it involves tile and piece placement, but it is different in several key aspects. In Taluva the player is not building castles, roads, or farmland; but is instead building an island. The pieces called volcano tiles are three-pointed star shapes, each one having three types of land on it. Some have more than one of the same kind, others have three different land types. The only thing that is common about the tiles (other than their shapes) is that each one has a volcano on them. These volcano places cannot have pieces placed on them, but do cause volcanic eruptions which means that the tiles can be placed on top of each other, turning the land from 2D into 3D, thus creating hills which can then turn into mountains.

Upon placing tiles, players can then place their pieces onto their tiles. Players have 3 different types of pieces:

To begin with, players can only build huts. These can be placed onto a tile they have just placed, or alternatively, players can expand their already built settlements by adding more huts. The benefit of this is so that they can build Temples which require a settlement branching across three areas of land. At the end of the game, whoever has built the most temples wins. There is though another side to this, as to build more temples, the player will need to create separate settlements, as there can only be one temple in each settlement. One benefit to building the temple though is that it can prevent volcanic eruptions.

When a volcanic eruption is caused by a player, they can use it as a way of destroying another players settlement. So when they place a tile, it can wipe out huts. Volcanic eruptions though do have rules to follow:

Placing Temples or Towers can therefore be a great way of preventing large-scale damage to player’s settlements as it would prevent other players from using volcanic eruptions. Therefore, opposing players would need to consider using eruptions in locations where players may be on the verge of placing a Temple or Tower.

For a player to place a Tower, they need to place it next to a settlement of any size, doesn’t need to follow the same rules as Temples. Towers though do need to be placed on a level 3 tile; so it can take time to build them as the land may need plenty of eruptions to allow a third level of tile placement. Once this is done however, a Tower can then be placed next to a settlement, even if there is a mega cliff from the tower down to the next hut. 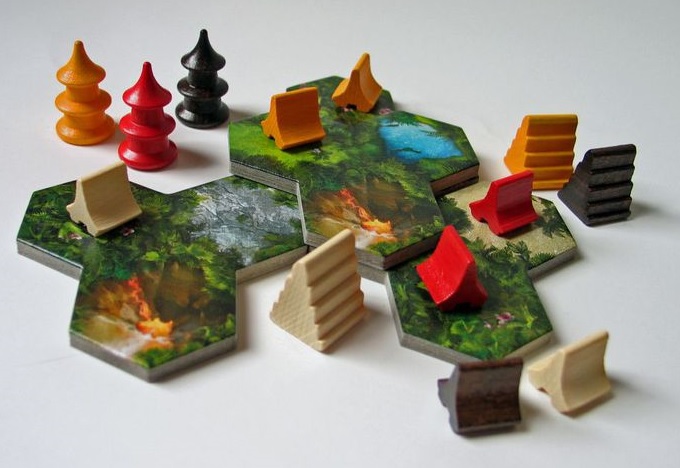 Then that player wins the game automatically; even if there are still tiles to be placed.

Taluva is a very easy game just to pick up and play, and is not all that long either. It can be tactical, be played both offensively and defensively and it can be fun just to destroy another players civilization with the simple act of causing a volcanic eruption. It’s beautifully designed and crafted, and it’s fun just to watch how the land starts off flat before becoming very hilly and mountainous. Altogether; Taluva is a very fun game and also one of my favourite Board Games.