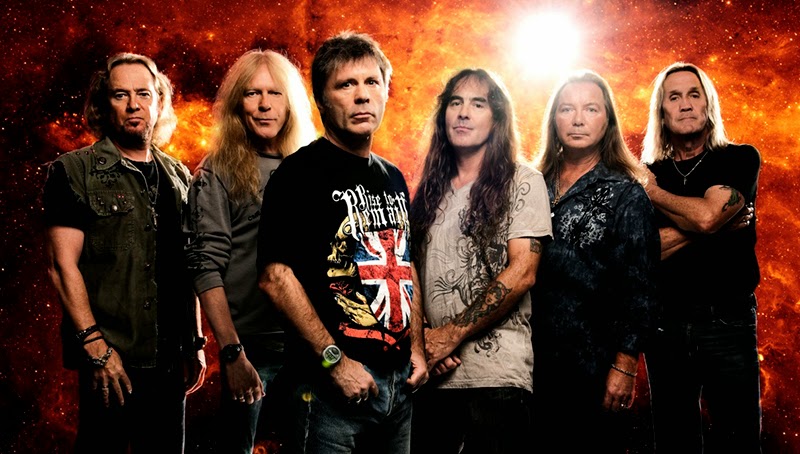 Last year, I passed my driving test, and have regularly been driving my Mam’s car. I usually just drive on a Sunday to and from Church in the evening, and to and from Board Games on a Wednesday and Tuesday evening. Since early January-ish, I have regularly been listening to music in the car to and from events. Recently I have listened to a couple of old albums on CD: Greatest Hits (Black Sabbath), and In Silco (Pendulum). I have actually struggled to enjoy these albums as much as I used to, perhaps I am not enjoying them as much as when I have been driving. One album though I have enjoyed listening to whilst driving is Iron Maiden‘s The Book Of Souls: Live Chapter.

It’s not the first time I have listened to Iron Maiden in any shape or form, but it is the first time I have actually bought one of their albums. I didn’t buy it to listen to in the car, I bought it about a week or two before then from HMV. I bought the Live Album because from listening to Iron Maiden previously on TV and on YouTube, I could only really listen to live versions of their music. I had listened a tiny bit to studio recordings in the past, and to me they just didn’t sound right. Live versions have this incredible Energy and Power to them which just makes them sound right.

Anyway, I have enjoyed listening to them a lot, so I thought I would do a post on which songs from The Book Of Souls: Live Chapter I have enjoyed the most. Some songs on the album I have listened to before in the past, and were a strong reason for me to purchase this particular album, also it’s fair to say that some of the songs on the Live Chapter aren’t from this album either (Fear of the Dark, Wasted Years, The Trooper, etc). This list isn’t necessarily what my favourite Iron Maiden songs are, but are songs which from this album in particular I have enjoyed the most, so don’t be surprised if I choose songs which aren’t unique to this album (although saying that, at time of writing I haven’t actually picked the songs yet).

Anyway, here are my Top 5 songs from Iron Maiden’s The Book Of Souls: Live Chapter:

5. Iron Maiden – Iron Maiden as a track could easily be summed up as being an anthem for the band. Ok, yes it does feature the band’s name, but that’s not what I meant by it. Iron Maiden to someone who hasn’t heard any Iron Maiden before is a great track to introduce them too. It features dark tones, fast lyrics, speed and power. It is a good track and through its short life span features everything featured in a core iron maiden song. It has a nice build up but doesn’t waste time, it dives straight into it’s lyrics and core tune, but also changes style a couple of times. It’s a song which can feel pretty quick, and you want more, but it has its own built-in encore and just goes all in once more, featuring it’s build up riff, then diving back into its main theme. It’s a song which regularly doesn’t disappoint no matter which performance it’s from. I will though say that the feedback it provides at one point (01:56) does sound like it’s at a day at the races. Other than that though it is incredibly enjoyable.

4. Death or Glory – Death or Glory is a song I have heard on many occasions before buying this CD. It’s opening riff beat and gradual build up is a sign of promise for me, as I know what’s coming. It’s a song which features very dominant chorus lyrics, in fact the chorus is about six lines long, and while a bit discombobulated, still feel pretty powerful. At it’s heart are the lines Death or Glory on a four line repeat, but it’s on the first line where the line is questioned and answered, by pointing out that Death or Glory are both the same thing. While all that is being preached though, you have this maddening heavy beat which just doesn’t let up, nor wants to. It’s a riff which fights to the bitter end, and it’s only in the end where it finishes. It doesn’t slow down or fade, it just dies. “Death or Glory!”

3. If Eternity Should Fail – This one feels very different to the others in this list, as it’s opening is slow. It’s an introduction to the show. It creates a build up to the first thundering pluck of the strings. When it gets going though, it gets going, but at the same time stays in theme to its opening. Not as fast as other Iron maiden songs, but still features some speed. It’s the calm before the storm, because well, you don’t go fast and loud at the start do you, you leave that until the end. It still features some pretty catchy lyrics though, and the riff isn’t too bad, actually it all seems to blend together really well. And then just as you get comfortable in your stride, it opens the tomb and lets the Mummy out. Next thing you know it feels like you are being chased and everything seems to be going much faster, and as you get tired, it slows down, but shouts at you, like there is something reaching out for your shoulder, and then you can’t help but look to see as something starts bearing down on you.

2. The Red and the Black – This one I couldn’t help but keep in my mind all night yesterday. I had heard it a few times before and liked it, but I almost always forgot about it, and would be surprised at how enjoyable it was each and every time I head it. It’s a loud but also nicely paced riff when the song get’s going, and the lyrics plus audience involvement works well with the track. But it’s when the song is near the half way mark that it changes tack. The riff is the same but the harmony is rather sweeter and smoother than it was before, and it’s in this quiet speed where the song’s charm lies. It just sticks in your head and holds on and while it’s style and key changes here and there, it’s still the same song, and just features several different styles of speed metal that there is something for everyone without necessarily changing into something else completely. It’s at the nine minute mark (roughly) that it gets to me though. It becomes very similar I think to The Clansman, and in that for me, is enough for me to enjoy listening to it non-stop. In many respect the song is a power ballad/anthem and really shows the talent of the band’s abilities in both music and effects. It’s a song which just leeches into your brain and will keep you hooked from start to finish, but just as it’s beginning to wrap up, you will want them to keep playing.

1. Wasted Years – Much like Death Or Glory, this one is a song while I have listened to many times before, and is one whose riff provides a reminder of great promise. The tune is fast, powerful and hits hard and just keeps going, and just sticks in your head. But it’s the lyrics where this song really provides it’s power. Their lyrics which just speak to me, and try to help me focus on possibilities and the future, telling me not to look back on past hard times, but to know that there are potentially better times ahead.

“So understand, don’t waste your time
Always searching for those wasted years
Face up, make your stand
And realize you’re living in the golden years”

They’re wonderful lyrics and ones to remember when times are tough, but also to the point and a good reminder to remember that while the life you once had in the past may have been bad, it doesn’t mean the future will be!