Question: Is there a strategy board game like Risk, but not too realistic, simple, and doesn’t take forever to play?

Answer: Yes there is.

Small World is a Strategy board game designed by Philippe Keyaerts, and produced by Days of Wonder for 2-5 players. Set on a fictional continent; Small World focuses on the empire building and founding of several different fantasy based races living in a world that is far too small for most of them.

At the start of the game, players will choose from a list of different races/empires/species, and use these races to try an conquer the land. To begin with, there are only a few races to choose from. Each race has a banner displaying set number of tokens and usually have their own special ability. Alongside these race banners are a randomly drawn set of bonus abilities which come into play additionally to that races own bonus. These extra abilities also have a number on them indicating how many bonus race tokens this chosen race comes with them. For example; the Elves Banner has a race token value of 6, now if the Elves banner was paired up with the Alchemist bonus, which has a race token value of 4; the Elves would receive an additional 4 race tokens to add to their army/empire. So the Elves would have 10 Race tokens, plus the benefits of the ability on the Elves banner, plus the ability of the Alchemist Bonus.

With the player’s race decided on; they will then use their race tokens to conquer the land. Now compared to Risk; where you chose an enemy land then rolled dice to see if you captured it or not; Small World is far simpler. Basically to conquer an area of land a player takes a number of their race tokens (usually at least 2) and places them in an area of land. If the area of land is empty, they place the two tokens in that land, and the area is conquered; Done! That’s all there is to it. In some cases there may be an obstacle such as a fortress, a mountain, or another players race in that area of land. In order to conquer these areas of land the player whose turn it is does the following: They play one more additional token per other token in the land. So if one player was using Skeletons and they wanted to conquer an adjacent area of land, which for this example will be occupied by 1 Sorcerer, they would have to play two tokens for the land, plus an additional token for the sorcerer. Once they place all three tokens on the land; the Sorcerer has been defeated and the land now belongs to the Skeletons. It is that simple.

In some cases, a player may want to grab some land but may not have the correct number of tokens to achieve this. In this case, the player can roll the reinforcement dice. This dice has numbers going from 0-3, and it works by allowing the player who doesn’t have enough tokens, to roll it and gain not additional tokens, but to act as if they did have those tokens. If successful, the player takes the land just as before, but does not add tokens to their stack in the area, only placing tokens which they had available to them, but the area is still conquered. 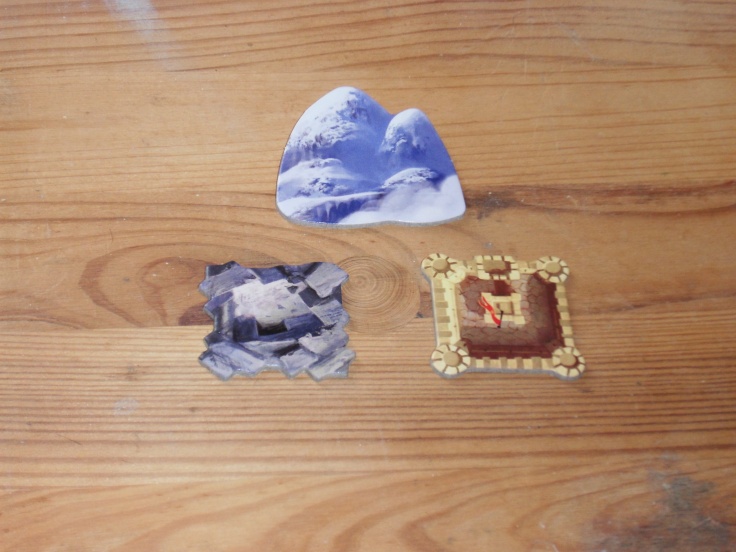 At the end of their turn, the player scores points for areas of the land their race has conquered, plus any additional bonuses, and then play moves on to the next player. Once it’s their turn again, players can pick-up their race tokens off the board, provided that at least one token remains in each area they still control. It’s with these tokens that the player can start more conquests with, increasing the size of their races empire and as such gaining more points over the course of the game.

Eventually though, your chosen race will become rather outstretched. With more land taken, and not enough units to conquer more, you will be stuck in a pickle trying to figure out how you can earn more points and grab more land. In this instance, players will have the opportunity to send their current race into decline. All race tokens on the board in areas conquered will go down to just 1 token per land, and will be flipped over to indicate that their race went into decline. It’s not all sad though, as while that race can’t move or conquer anywhere else, their tokens will stay on and won’t go until they’re conquered, and as long as they stay on the board, the player will continue to receive points for their in-decline race. Once sending their race into decline, the player can choose a brand new race and bonus; with which they can continue their conquest of the land; all the while with their previous race still bringing those precious points. The player will need to be wary however, as while they can later send their second race into decline to start a third race, (unless they have the appropriate bonus) their original race will disappear from the board completely.

After a set number of rounds, the game ends, and the winner is the player with the most points at the end of the game; and that’s all there is to it. It’s a simple to play, easy to pick strategy game for both casual players, and long time strategy fans.