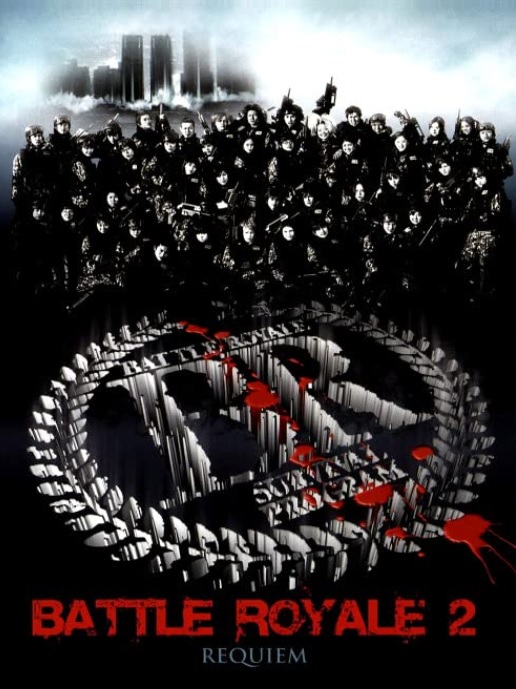 I have not seen Battle Royale 2 yet, but I have heard suggestions that it’s not as good as the first film. It does though have a pretty good trailer! The film’s trailer is like a flash in a hot pan; it’s short, but gruesomely sweet!

It begins with the notion that this time around, things are going to be different, followed by a pretty straight to the point character (Riki Takeuchi) highlighting the film’s title. Whilst in the background we get the same piece of theme music from the first film. We then see flashes of new characters, wearing the explosive necklaces, along with some flashes of violence, just to remind us of the connection with the last film.

Things then jump forward, and we see images of a battlefield, and an invasion on an island. This is then followed up by some large explosions whilst Shuya Nanahara (Tatsuya Fujiwara) from the previous film delivers a stern warning to the world! There is yet more explosive action to come, followed by this film’s most incredible sight, footage of skyscrapers being demolished in quick succession.

This is a very different kind of film from the previous entry, it focuses on a different kind of unnecessary violence. It chooses to be more of a battleground, and increases the stakes by involving more people. It’s on a far larger scale, and that shot of the towers collapsing is just incredible, especially packed up with that final crescendo in the theme tune.

Whilst it may not be as good as the first film (I am still holding out hope for it); it at least provided us with a pretty awesome trailer!