It has been 42 years since the original Godzilla was killed by a device called the Oxygen Destroyer. Now, a new menace, has evolved from it! But, worst of all; Godzilla has gone into Meltdown!

Released in 1995, and directed by Takao Okawara; Godzilla vs. Destoroyah is the 22nd film in the Godzilla series, and acts as the final film in the Heisei Era. Billed as the last film in the franchise at time of production; the film’s legacy was almost immediately cemented by announcing that the film would see Godzilla’s Death (although in the next 5 years there would be at least two further releases bearing his name). Original plans for this film included the idea of Godzilla fighting the ghost of the monster from the 1954 film, but that idea was scrapped. Elements from the original film though were included in this film as nice little references.

Following on from Godzilla vs. SpaceGodzilla, Miki Saegusa (Megumi Odaka) discovers Birth Island has been destroyed, and both Godzilla and Godzilla Junior have disappeared. Shortly thereafter, Godzilla arrives in Hong Kong, with his chest glowing like a lava lamp. It is theorized that Godzilla’s nuclear heart is about to explode and will kill all life on the planet. Meanwhile, strange things start happening across Tokyo, as a new terrifying creature is born!

With a film series spanning 30 plus films, over 60 years; the Godzilla series has had its moments where it tries to allow other genres into its films. This allows the film series to try to expand its audience, and allow other people to enjoy these films. Some of these have been more successful than others; but there are examples of romantic stories, tragic dramas as well as stuff aimed at kids. Some things though, such as Horror; are harder to do given the films content, because Horror works on the level of directly attacking or menacing people on their level, not at a 50-meter-tall level; but that does not mean that the filmmakers have not tried to do Horror.

Godzilla vs. Destoroyah starts out as a horror story. It creates scenes and situations and builds anticipation, before allowing some real shocks and genuine feelings of terror. This though, doesn’t last! As the film reaches it’s final act; it shifts focus, and turns more into a continued tragedy building up to the BIG G’s death (I would say spoiler alert, but this film was pretty much marketed for/about his death, so it’s not a major spoiler).

Godzilla vs. Destoroyah’s scenes of horror are well made as they allow anticipation and excitement, whilst creating non scary moments, as potentially as scary as possible. For instance, the scene in the aquarium: its perfectly setup for something to jump out and scare you, but nothing does, but during the scene, you begin to curl up into a ball, thinking it will happen. It’s just a case where the filmmakers try to scare you in the smallest way possible. The scene at the construction site meanwhile is our first real introduction to Destoroyah as a monster, and it is so genuinely scary. It’s terrifying, horrifying; and it just gets worse for the people involved, but the buildup and anticipation of what is going to happen just builds the excitement up, until what happens; happens!

The film’s special effects are in overtime, especially in the field of animatronics. The movement in the features on Destoroyah’s face are exceptional, and the miniatures just look amazing, as they show a small level of movement detail, where as before there was very little. The early moments where Destoroyah is flying are nice and smooth too, as it looks like it’s just gliding through the air in a very sleek fashion. These simple effects are simply put; very cool!

Godzilla vs. Destoroyah is an interesting film, but it does have its shortcomings, and the biggest offender, is its plot. The film does work hard at tying up loose ends, but many of these points are wrapped up as quickly and as quietly as possible. They get wrapped up, but blink; and you will miss them. There are some points of continuity errors, but they really only lie in the fight sequences.

Godzilla Junior for instance suffers a rather horrific injury, but then it heals up very quickly. The fights have large periods where nothing happens, where combatants just won’t move. It’s like watching a wrestling match where the wrestlers slap each other for a few seconds, and then break off for five minutes. Also, when the smaller Destoroyah creatures attack Godzilla, why is it that only one is ever on Godzilla, and the rest are just queueing up by his feet? But these issues are small compared to the big problem!

The film’s title suggests that Godzilla will fight a creature called Destoroyah, and we anticipate that as audience members, but at the same time we expect that, to be the film’s main plot; but it isn’t! Most of the film’s plot concern’s Godzilla going into meltdown. Now I am not necessarily knocking it, it’s a cool story and pretty intriguing, but again, where is this other monster we have been promised? With that kind of title; it should be our main focus, and the film’s main focus. But it’s another case of a film trying to tell parallel main plots. It does one then the other, and tries to tell two on an equal level. But when films do this, they never succeed; and in the end one has to be the audience’s main focus, and as a result, Destoroyah becomes secondary.

It’s not the only time a Godzilla film has been created this way. Godzilla vs. Megaguirus did exactly the same five/six years later. Godzilla is a menace, and needs to be removed, but also there is another monster hanging around, whose plot becomes tertiary to the entire film; despite the title being named after it!

I am not necessarily saying this is a bad thing and filmmakers can’t do it, but in those respects, and given the information you are feeding to the audience, before the film starts; then you need to affix the films title appropriately. This could then allow the existence of a second monster to be a surprise, and give the film an extra layer, a twist, something unexpected to ramp up the story’s intentions, and ultimate conclusion. Much better than ending a monster fight with some random calm, and then have the aggressor fly away; only for the military to deal with it far more quickly and effectively; than the film’s main star, just to get it out of the way! 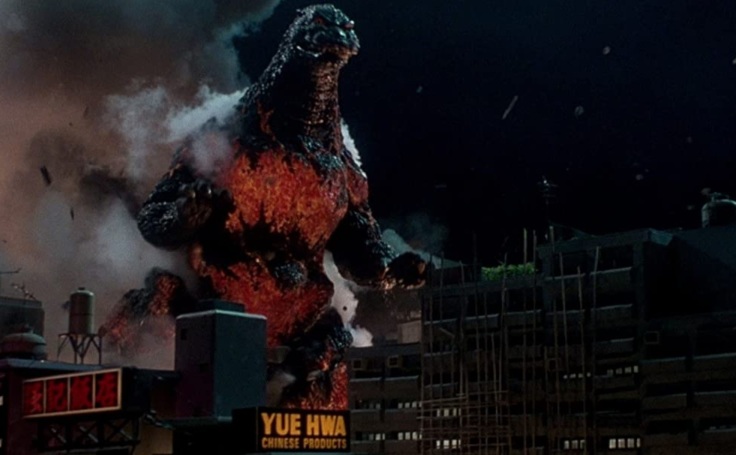 It’s not like the film didn’t try to make Destoroyah’s involvement second fiddle throughout. Destoroyah is a really interesting creation. It has several steps, starting off small, getting bigger, and ultimately combining into a much bigger and more terrifying creature. The design of the smaller creature does borrow bits from the Xenomorph, but then as it grows it becomes it’s own thing, with some terrifying abilities. It’s final form genuinely looks Evil. It’s like the producers saw the film Legend, and thought: ‘I wonder if we can get Tim Curry to play Destoroyah?’, because he looks as over the top as Tim Curry in Legend. Plus, the character’s backstory is very well made, including very fine details referencing the Oxygen Destroyer from the original film. 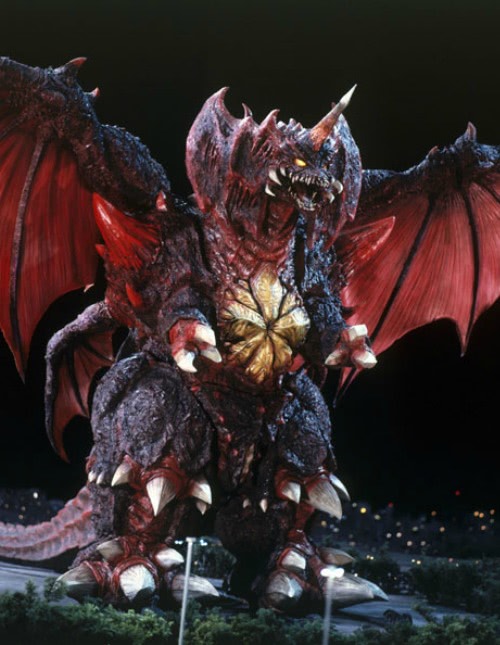 The film’s soundtrack is an interesting score. It is in fact Akira Ifukube‘s last score in the series, and the final film he worked on. It is a combination of reworked modern classic tunes from the more recent film’s with some of the older score brought in for good measure. Not many really stand out, well, except for Godzilla’s theme when attacking Hong Kong. It’s dark, brooding, low and angry. It features heavy horn sections to create a truly unique version of the classic Godzilla theme.

Godzilla vs. Destoroyah is a weird entry in the series. It has a few defects in it’s production and continuity, plus the story is sort of all over the place. But, it does have it’s positives. The stories are muddled but very engrossing in their own rights, the fights are frequently dull, but also entertaining and brutal when they do fight. The special effects are well done, the monster designs are terrific, and the score is a great combination of both old and new classics. Yes the film’s genre splits into the third act, but the tragic ending is very well done. So yes it is a weird film, that leaves a mixed response; but it does end in a rather nice way.

Usually in these posts I conclude with a trailer for the film below, but here, I have chosen something different. The film’s ending is like a double whipped cream, double cherry, double flake, double marshmallow on top of a very large sundae. The film ends with a nice shot, but then goes into a wonderful tribute to the series, with a classic theme, and a selection of moments from the 1954 film and Heisei Series. It’s just a really nice way to end the film!