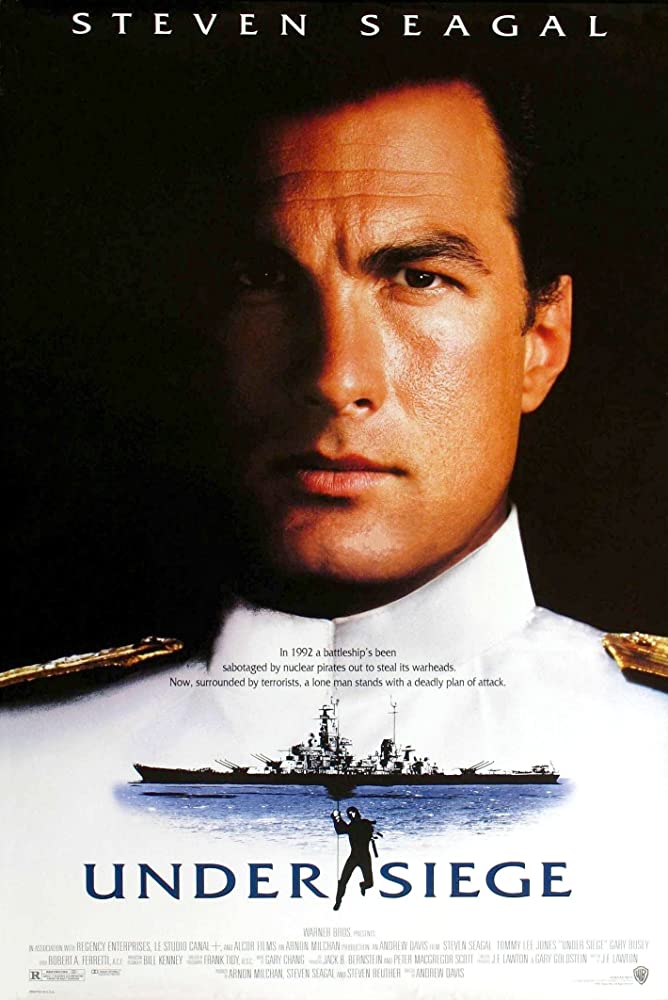 A few months back, I came across a very interesting video on YouTube called: What Was The Appeal Of Steven Seagal? It was a video essay which discussed, and argued on the topic of action movie star; Steven Seagal. The video talked about how the actors most recent output was mostly in the form of direct to DVD titles, in comparison to his more well known films from the late 80s and early 90s when he was considered a major action star; and went deep into how on earth this all happened and why he maybe isn’t as revered as he could be! I won’t ruin the video for you, it was a pretty good show and well worth the watch. But it is still a very prickly question; I mean, where did it all go wrong; especially when it seemed to start out so well?

I first got a taste of Steven Seagal when I was a kid and there was a late night showing of Under Siege 2. My dad said it was a good film and I wanted to know more, so as I went to bed, I had it recorded. Upon watching it; I liked it, I thought it was brilliant. Then a few weeks later, there was a showing of the first Under Siege film, so I had that recorded too and watched it at a later date. I liked that also. Both films have their merits, both are very enjoyable movies; and films that you can pretty much guarantee will be shown on a television channel at least once in the year. And whilst they may appear to be a bit corny in their presentation, I can almost guarantee that you will watch them all the way through. They are both really good action movies; but the best one by far is the first one! 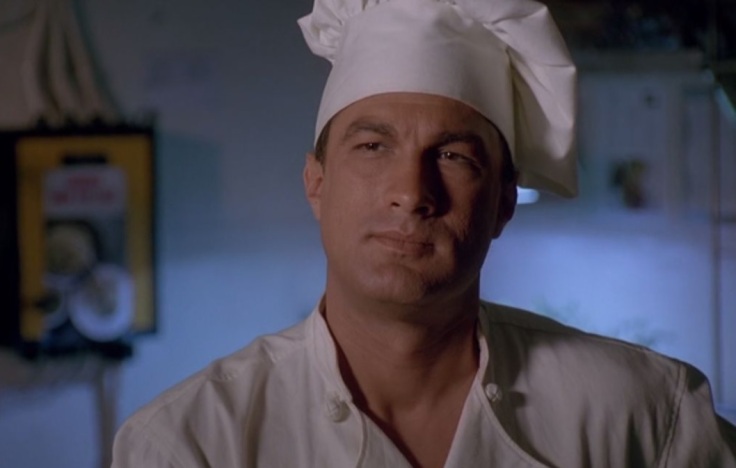 So what is/was Under Siege? Under Siege is an action movie released by Warner Bros in 1992. The film was directed by Andrew Davis whose other titles include The Fugitive, and Above The Law (which also starred Seagal). Along with Seagal the film also stars Tommy Lee Jones, Gary Busey, Colm Meaney, and Erika Eleniak. The film is set aboard the USS Missouri; an Iowa-Class battleship built during World War 2, on whose very decks saw Japanese foreign affairs minister Mamoru Shigemitsu sign the official instrument of surrender; officially ending WWII. To date; Under Siege is Seagal’s most Commercially and Critically successful film, grossing over 150 Million at the box office and garnering two Oscar Nominations for sound production! 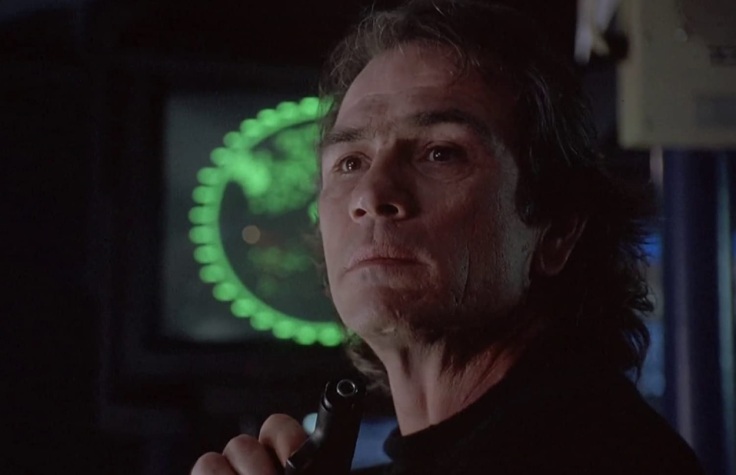 Basically, Seagal plays the part of Casey Ryback, the personal cook to the ships captain (Patrick O’Neal). Ryback is liked by the other crew mates in the galley, but isn’t much liked by the officers on board the ship (which includes Glenn Morshower). After an altercation between himself and the ships Executive Officer; Commander Krill (Busey), Ryback is thrown into a meat locker. At this time a group of entertainers arrive on the ship led by musician Bill Strannix (Jones) who are there to entertain the captain for his Birthday. At the party however, things turn violent as it turns out the entertainers are hi-jackers and commandeer the ship, imprisoning the crew in several positions all throughout the vessel. After an attempt to try and kill him goes wrong, the hijackers discover that Ryback isn’t a plain and simple cook, but is actually an Ex-Navy Seal, who is making it his mission to take back the Battleship!

For the most part, Seagal could be considered as Silent But Deadly, as most of the time he talks in a low and calm whisper, no matter what the situation. As the events of the film pass by his methods become more and more extravagant, even having to use the ships massive guns in order to sink an enemy vessel. It’s his martial arts skills though that are the real show. It’s like only the villains ever actually get to show off their guns and trigger happy fingers, as Seagal uses a combination of lethal and gruesome strikes to take down his enemies. It’s through this approach though that helps with the films plot pacing and characters, as his more silent approach allows his co-stars to really shine! 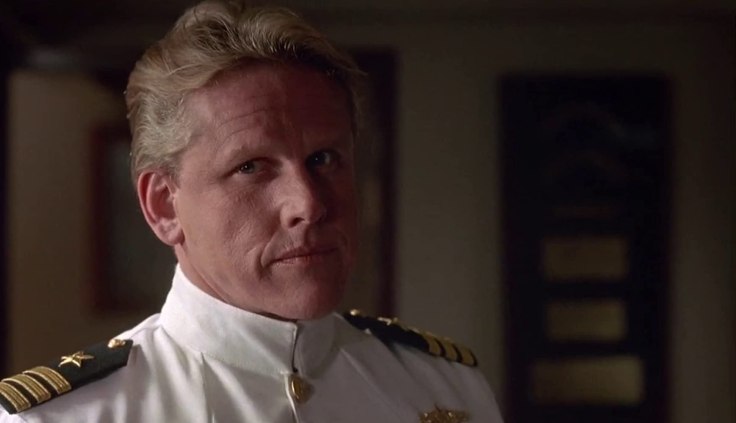 As the appeal of Steven Seagal suggests, putting Seagal’s skills up against larger than life actors really helped to pay dividends for the film. These two larger than life actors being Gary Busey and Tommy Lee Jones. Gary Busey plays the corrupt EXO on the ship, taking command as his group of hi-jackers takes over. He spends a large amount of the film shouting and yelling at how unfair his life on the ship has been, and much more loves the power he has attained since hi-jacking the ship. Tommy Lee Jones meanwhile is an entertainer, with a dark history; not in the form of sex, drugs or rock ‘n’ roll; but as a rather dangerous ex CIA operative who has done quite a lot of bad stuff. Compared to Seagal, these two seem more dangerous as they are able to control a lot more power, and are possibly far too insane to have it; let alone what they might do if they were to lose it! It sets them up as a great villain to take down, plus act as a major hurdle for the hero to overcome!

It’s not just theses three though as the film does have a lot of core second and third party characters who all seem to create the perfect storm on screen. Such mentions including Admiral Bates (Andy Romano), Captain Garza (Dale Dye), and Tom Breaker (Nick Mancuso); as well as the afore mentioned other members of cast, and even a young Raymond Cruz. But there is also another character in the film to consider. Many writers and screenwriters, as well as viewers will happily mention that locations are characters in themselves. In this case we have a very powerful one; that of the USS Missouri. The Missouri is a majestic sight. It’s one of the last great battleships ever built (due to the increased use of aircraft carriers in war) and at the time of the film’s production and release was going through a second life. Originally decommissioned in 1955, it was reactivated and modernised in 1984 as part of the 600-ship Navy Plan. This was also the case for the other three Iowa Class Ships, due to the potential threat brought on by the commissioning of the Soviet Kirov-Class of missile cruisers. The Missouri is the perfect setting of the film in many respects as the idea of a group of hi-jackers commandeering a mighty battleship, is already a scary idea. The film brings this idea into effect by making the ship a part of the film as much as possible, and introducing it as soon as possible. To this end we have this amazing opening sequence!

Straight in; Boom, we get an image of the ship sailing across the ocean. We get images of it’s weaponry, it’s deck, the internals, computers, everything! We then get close-ups of it ploughing it’s way through the sea; smashing and breaking waves, with the pure sound of this interrupting the films own soundtrack; just to make sure we all know how powerful it is, from looks alone! It has to be one of the most epic introductions to a movie ever! 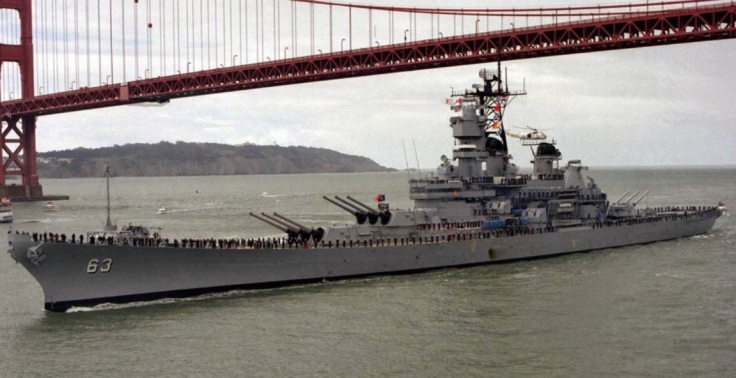 It’s really hard to continue going on without spoiling the film entirely. It’s a film which has a lot of merits and really should be classed as a legendary movie, not necessarily as an exclamation point on the start of the sad demise of one actors career! It’s filled with action, elements of drama (at points), plus has the element and action of naval warfare, in a marital arts movie! It also has a great soundtrack, featuring music from artists (such as The Regulators) you may never have heard of before, or since.

Whatever may have happened to Seagal could be considered as a shame, because well, in the case of this movie alone; it really shows what his films were capable of in the right hands with the right direction behind it; but maybe that’s saying more about the producers than the man in the film! But, nevertheless; Under Siege is an epic action movie that doesn’t just ticks all the right boxes, it smashes them!