Escape from New York is one of my favourite films. I have loved it ever since the first time I watched it. It has a great cast, a cool setting, a brilliant story, and of course, a fantastic soundtrack. It is practically perfect! Escape from L.A. meanwhile, is practically dreadful! It is one of the worst sequel ever produced. Now, following on from Escape from New York was always going to be tricky; but this is just rubbish!

For a start, the story is mind blowing-ly off the wall. It’s not incoherent, or hard in anyway to understand; it’s just not gripping or attractive. There’s nothing about it that grabs your attention or pulls you into the world. It is less a film plot, more a collection of short pieces thrown together. And, it’s just treading on already established water; as pretty much all of it’s key characteristics, are just the same pieces of plot from Escape from New York.

But things don’t end there. Snake Plissken is already cool; no question, he is a cool character; so we don’t need to see him play basketball, or surf; it’s just not needed. Several supporting cast members are also just weak, including those of a more prestigious position. The President (Cliff Robertson) for one does not come across as a corrupt politician, or a dictatorial figure; he’s just a weak, and pathetic coward, so how is he supposed to be a secondary villain?

Then we get to the visual effects; which seem to have been included, just for the sake of having them. They’re rubbish! Even for the time they were used in, they would have looked weak, and now just look pathetic. They don’t add anything! And more practical effects have been sacrificed to make way for the CGI. I mean, what’s wrong with using a real helicopter?

It is a waste of a production; one which you can instantly regret watching. But; despite it’s many flaws; it does have some quality points (just). So, I thought I would highlight some of these; but in honesty, I was scraping the bottom of the barrel just to get five. But here we go with Five Things to Like About Escape From L.A.; Enjoy!

5. The Shark – Like I said, I was scraping the bottom of the barrel with this list. But The Shark in the submarine scene was a pretty cool addition. It’s a nice little surprise, which leaves you scratching your head, asking if it’s a prop for a ride, or a real (albeit CGI) Shark? It’s pretty cool!

4. Soundtrack – The soundtrack (composed by John Carpenter, and Shirley Walker), much like the first film is a welcome addition to the film. It’s not as cool, or anywhere near great as the first film, but it still has its moments. From the little titbits, such as when the hooded man appears in Beverley Hills. But, above all that, we see the welcome return of the first film’s title tune; as well as Snake’s new cowboy theme tune too!

3. Malloy and Brazen – Malloy and Brazen are two characters which have been put in a difficult position; but, they practically excel. Brazen (Michelle Forbes) for a start does not come across as a villain, nor a bad person, just someone doing her job. This rather bland exterior, means she is the only middle ground character in the film; and one we can connect with as outsiders. She is, to some extent, the film’s narrator. Malloy (Stacy Keach) meanwhile struggles to fill in as a replacement for the great Lee Van Cleef; but still has a good go at it. he is another in a long list of villains in this film. But to another extent, he is more of an anti-villain just trying to do his work, but in a pragmatic fashion. He is a practical person, who tries to do things the right way, even if he is doing them for the wrong reasons. Together Malloy and Brazen make a good team, and create a great onscreen presence! 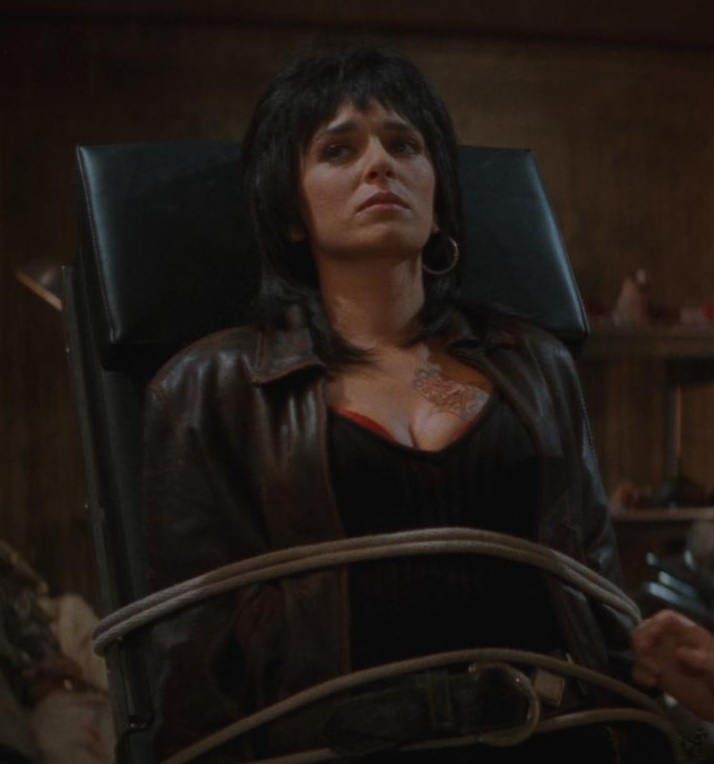 2. Taslima – Malloy and Brazen though, are not the standout supporting cast members of this film; that distinction goes to Valeria Golino as Taslima. Possibly cast to create the same scene featuring Season Hubley in Escape from New York; Taslima appears on scene for just a few short, but glorious minutes. Compared to the rest of the cast who come across as a load of backstabbers; Taslima has a much more caring approach to her, and becomes a character to both root for and care about. Plus she is in general quite a cool character, with a cool look, voice, and leather jacket. But in this short but glorious few minutes; we get the worst moment in the whole film; when she gets killed off! This is the moment when the film loses all hope of being good, because during this point it was starting to redeem itself. You want Snake and Taslima to connect, and even for them to ride out into the night/sunset at the end of the film. But when she gets killed off, you feel like your heart has been ripped out, and you have lost something truly valuable!

1. Welcome To The Human Race – The gap of time between the death of Taslima and the ending is rather long and relatively boring. All the somewhat good stuff has been and gone, and we finish the film with a long standoff between Snake and the remaining characters, debating…something. But, we do get left with a good moment: the concluding line. It could be that the film was trying to make or send a message with it’s ending line; but one the whole it is just a cool line to finish the film on. So, whilst it is a largely un-eventful film, we do finish on something that was worth sticking around to the end for!